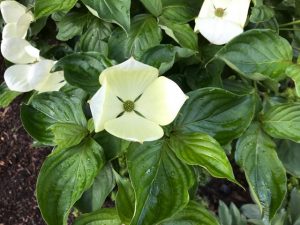 Our garden is nestled into the Eastern Hardwood Forest of the Southern Appalachian Mountains. We are surrounded by oaks, poplars, hickories, maples, and many other wonderful trees. Amongst these giants, I have planted some little gems. Some native, others not, many acquired in quite small pots – fun to watch them grow and develop. Many are real show-stoppers right now.

Our native dogwood, Cornus florida was so showy this year. The floral bracts, which can be a little yellowish some years, were bright white. Cornus kousa comes along a bit later, but right now Cornus VENUS is magnificent in my garden. C. VENUS is a hybrid of slightly complex parentage, but essentially a cross of C. kousa and C. nuttallii. The floral bracts are incredibly large and beautiful. 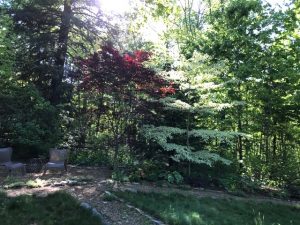 Showy for a different reason, Cornus controversa ‘Variegata’ has lovely variegated leaves and a layered architecture that gives it the common name The Wedding Cake Tree.  This tree was given to me by a local nurseryman as a mere twig and I have lovingly watched it develop into a beauty.  Another variegated dogwood, Cornus kousa ‘Wolf Eyes’ has a variegated leaf, but is much more diminutive in stature and is great for small, partly shaded gardens. 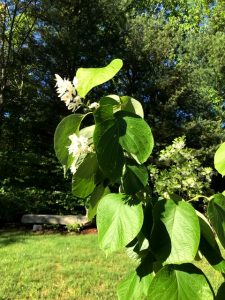 Next up, Snowbells.  Styrax japonicus is best sited where the dangling flowers can be seen from below.  Ours is planted next to an outdoor shower and as it has grown, I’ve pruned it so the flowers make a delightful canopy for any bather.  A few years ago, my friend Sieglinde and I made a pilgrimage to the Piedmont of NC and visited Nancy Goodwin’s garden Montrose in Hillsborough, the JC Raulston Arboretum and Plant Delights Nursery, both in Raleigh.  A very fun trip for a couple of plant nerds; we really had the truck packed with plants on the way home!  My most treasured acquisition from that trip is Styrax obassia (pictured left) bought from Nancy Goodwin who propagated it from cuttings of her magnificent tree.  It is flowering for the first time this year.

Most recent is my Styrax japonicus ‘Evening Light‘, a purple-leafed form.  It is newly planted, but full of flowers.  The leaves are mostly green, but some information that I’ve read indicates that it takes a couple of years to produce the purple foliage.  Hmmmm. 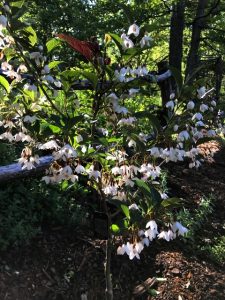 Lastly, Beeches.  In spring of 2005 I planted Fagus sylvatica ‘Riversii’.  I so admired the ancient (well, at least 100 years old) European Beech at Biltmore Estate, that I had to have one at Acorn Hill.  At the time there wasn’t much around it but grass and a Hemlock hedge behind it.  I’ve since added many garden rooms that will eventually be in the shade of this tree.  One of my favorite things about this tree is how the supple new growth extends and hangs like earrings from the branches.  Eventually the new growth hardens off, but I love this stage.  The leaves emerge pale copper and gradually darken. 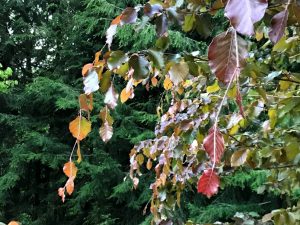 I also have a small Fagus sylvatica ‘Dawyck Purple’ which is columnar.  Ten-year growth is 25′ H x 6′ W and ultimately it will make 50′ H.  I have it planted in the Terrace Garden now, but in a year or two I’ll find it a permanent home.  It too has the droopy new growth.

The Beech at Biltmore was cut down last year; it had been in decline for more than a decade.  The trunk was amazing, like a giant elephant’s leg.  I spoke to it each time I passed by.  They’ve planted a new one in its place which will no doubt delight visitors for a great long time. 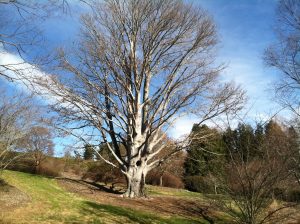 P.S. I must also mention Fringe Tree as both our native, Chionanthus virginicus, and the Chinese, Chionanthus retusus are blooming their hearts out.  Below is C. retusus with a sculpture made by Aunt Belle (self-portrait?) nestled against its trunk … Oh my! 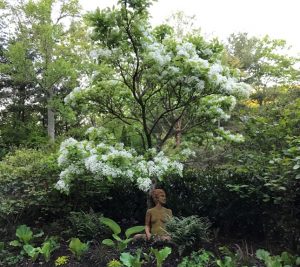