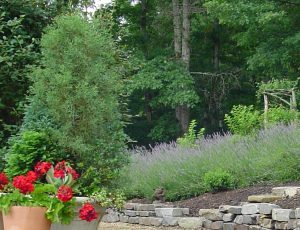 The one constant in a garden is change.  Plants grow and sometimes die; a sunny spot becomes shady; a tree comes down and makes a sun garden where you just planted ferns; and then there’s the hand of the gardener.

About this time of year I start thinking about what changes I might make.  It’s a nice time because the distraction of the abundance of summer is past, but deciduous plants still have their leaves and perennials, although fading, are still in evidence.  I find it an easy time to assess structure and think about additions and deletions (I can be quite ruthless).

This morning I was assessing my Terrace Garden.  My, oh my, how this space has changed.  I prefer to document my garden in pictures, so let me show you how it has evolved.

To set the stage, most of our garden started as turf grass.  On one side of the house a gentle grade sloped up to the high point of our property.  This slope, 40 feet long by 20 feet deep, has a grade change of about six feet or 30 percent. 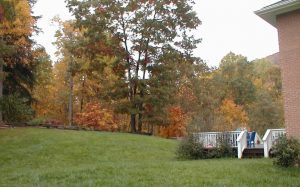 I could see this slope from the upstairs windows and thought it would be interesting to create a pattern of some kind.  Inspired by medieval knot gardens, I planted three interlocking diamonds of Lavendula x intermedia ‘Grosso’ – 150 plants.  Go big or go home, right? 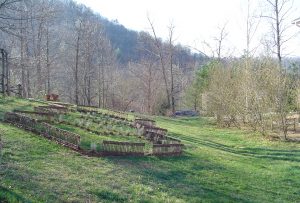 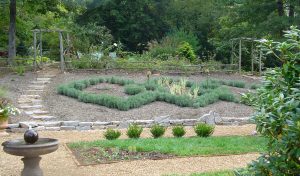 For those who haven’t grown 150 lavender plants in a particular pattern … to keep this looking good in spring I had to clean out the leaves that caught in it, prune it after the new growth broke, cut down the spent flowers in summer, and shape it up a bit late in the year to keep the pattern evident, all while working on a slope. 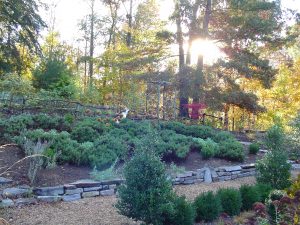 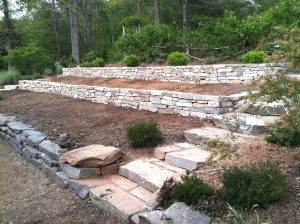 After six years of this ridiculous endeavor I decided to terrace the space.  Slow on the uptake, but I got there.  I actually had some nice guys build the two new stone walls as I had decided my stone laying days were over (until we built the pond, but that’s another project).  My planting idea was to trial perennials in the terraces.  As a designer, I like to try plants out before putting them in someone else’s garden.  This was to be my perennial laboratory, testing new introductions and trying out interesting combinations.

Turned out that this was quite fun and lovely to look at in the growing season.  However, I was unimpressed with the look during the off season, which for us is four or five months depending on the weather.  It just didn’t look good long enough and while not requiring the extravagant maintenance of the Lavender Knot, it did take a good bit of work to keep it ship shape in summer. 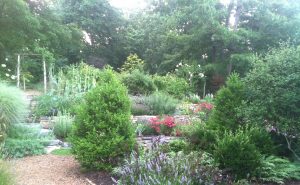 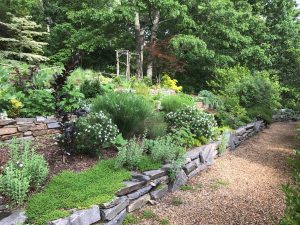 Enter the dwarf conifer and dwarf shrub phase in 2015.  I removed most of the perennial material and started collecting small woody plants.  The dwarf conifers give year-round interest, the small woody shrubs add flowers, colorful foliage, and nice bark in some cases.  And I still have some perennials such as hardy geraniums, for some summer punch.  (You can see my current plant list at the bottom of this post.)

It will take some time for all of this to grow in, but I have great expectations for a stunning look that is much lower maintenance.  I’m sure I’ll have to shuffle a few plants around down the road.  This morning I decided to add more Calluna next spring.  It is colorful and evergreen and does well given the good drainage. 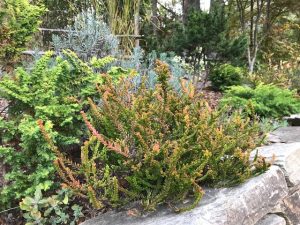 I‘m glad to have had all that lavender.  I look back and remember how excited I was to try that.  One thing that does not change is Dido –  did you notice him on the wall in the top picture?  He has been steadfast through all the changes and waits patiently for what comes next. 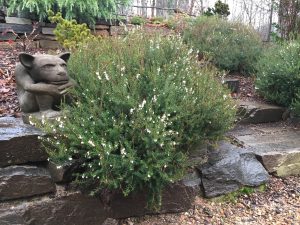 Note:  there are a few trees planted in the mix such as Fagus sylvatica ‘Dawyck Purple’ and Acer palmatum ‘Shishigashira’

Subscribe to get notified about new features and promotions.

Nancy Duffy is owner of Muddy Boots Garden Design and has been designing (mostly) residential gardens in Asheville, NC since 2001. She is an avid gardener and certified plant nerd. She lives and gardens on four acres with her husband Dennis and Gidget, their German Shepherd Dog.

Dennis Duffy is a marketing consultant and blogger. In his off time, he is an avid runner and cross trains by moving mountains of mulch and compost.

The illustrations on this website were done by Nancy Duffy. She also does custom drawings from photographs. Click here to learn more about her Garden Portraits.

We use cookies to ensure that we give you the best experience on our website. If you continue to use this site we will assume that you are happy with it.I agree.Privacy policy