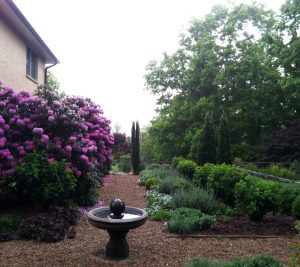 Along the northwest side of our house is an area I refer to as The Formal Garden.  This was one of my earliest garden areas to develop.  It is essentially a corridor between the front and back of the house.  As I’ve been clearing up this spring I’ve noticed that many of the original perennials and some of the newer ones too, have either died or just worn themselves out.  The woody plants, however, are going gangbusters.

When we moved in sixteen years ago, the Rhododendron were small, there was a Spruce and lots of grass. 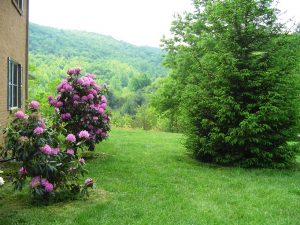 Now the essence of this garden space is as follows:

Here is the Formal Garden through the seasons: 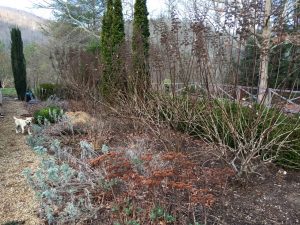 Mid March the Hydrangea paniculata ‘Tardiva’ just before pruning.  This plant will grow to the size of a small tree and the flowers will be at the top of the plant.  We (Amanda and me) take this down to about 24″ – 30″ in early spring.  This Hydrangea blooms on new wood, so you never have to worry about taking off the flower buds.  Note Amanda’s little rascal Daphne as a pup last year. 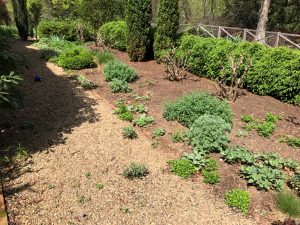 April after pruning and perennial clean up.  The Hydrangeas are pretty rough-looking, but they won’t be for long.  The perennials are just starting to green up.  The evergreens give the space structure during this spare time.  I really need to add some spring bulbs to this garden. 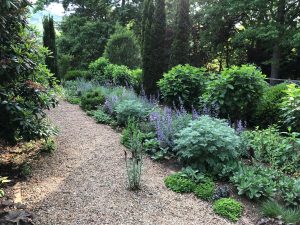 In May the Hyrangeas have cloaked themselves in leaves and the perennials are looking great.  Also in May the Rhododendron catawbiense bloom (see top picture).  Notice in the gravel one of my new favorite plants:  Lysmachia atropurpurea ‘Beaujolais’.  This is a short-lived biennial that, in my experience, comes true from seed.  It is not invasive like Lysmachia clethroides, Gooseneck Loosestrife, but it will seed around.  I originally bought three plants and it seeded back.  I collected seed last year and spread it around, but have seen only a few seedlings so far.  Wear gloves to collect seed as they are really sharp. 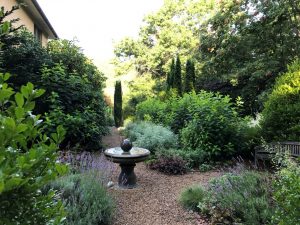 Mid summer is mainly lush and green.  I use the silver of Artemesia ‘Powis Castle’, Stachys byzantina ‘Helen von Stein’, and the variegation of Caryopteris divaricata ‘Snow Fairy to brighten this up.  On the Rhododendron side are chartreuse Carex ‘Everillo’ and various hostas for texture and color.  I don’t usually like chartreuse and silver in the same area, but for some reason this does not offend. 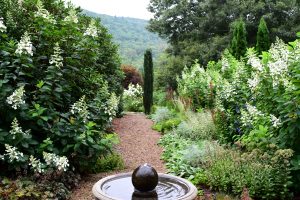 By August, the Hydrangea paniculata ‘Tardiva’ are strutting their stuff. 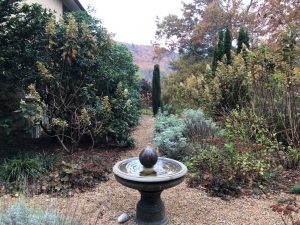 And by November the evergreens are starting to show up again.

One of the best perennial combinations in this garden has been Alchemilla mollis, Nepeta ‘Walkers Low’, and Stachys byzantina ‘Helen von Stein’.  As “they” say, this was a happy accident.  I was looking for bargain plants to fill this border and found these at a great price.  The Alchemilla and Nepeta green up early and bloom at the same time.  The Stachys gives a nice textural contrast and sets the other two off.  Now I use this combo regularly in my designs.  These perennials are long-lived and solid performers.  However, after many years this particular planting has worn out.  The Nepeta has shifted around in the bed and the Alchemilla has died out in the centers.  I will probably replace these this year with more of the same because it works so well and I really enjoy it. 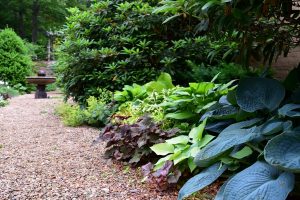 Opposing this is the Hosta, Fern, Heuchera, and Carex.  The problem on this side is that the voles just about decimated my Hosta collection.  Every morning last summer I would walk out and find another Hosta laying on top of the soil with no roots.  Voles were a really big problem in our area last year.  I’m hoping that was a population peak and we won’t see as much damage this year.  I’m doing two things to combat the Voles:  1)  I’m going to dig up every Hosta (argh!), lay hardware cloth in the hole, and backfill with soil amended with Permatill and Molemax, and 2) We have two young cats who I’m hoping turn out to be good hunters! 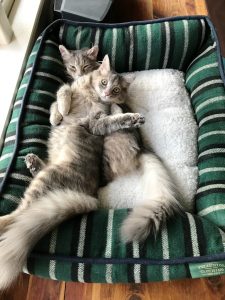