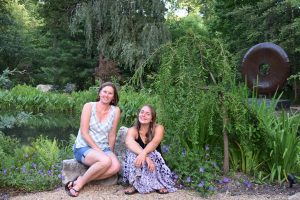 I have a few special garden friends who, along with myself, I consider plant nuts.  One such nut, Amanda, and I made an early trip yesterday to one of our favorite nurseries.  I was on a mission to get vegetable starts and Amanda just wanted to scope out this year’s selection.

This particular nursery, Painters Greenhouse, is a bit unusual.  Painters is open from March 1 to June 30 each year and they offer a lot of annual bedding plants and baskets, vegetables and some perennials and trees and shrubs.  The nursery is a family-run business and in the past several years they have really amped up their plant offerings.  They now carry their traditional selection of summer annuals, but lots of great native perennials and a widening selection of trees and shrubs. 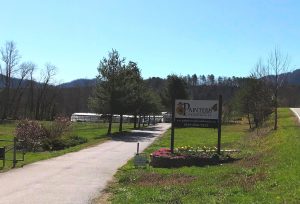 The fun thing about Painters Greenhouse is that the closer you get to the June 30 closing date, the cheaper the plants are.  They are reasonably-priced to start with, but you can get some great deals at the end of their season.  My strategy is to take an early pass, like Amanda and I did yesterday, and make a list of must-have plants that I’ll buy early before they sell out.  As I have time throughout their season, I’ll occasionally pop down and pick up things as the prices go down.  Then at the end of the season, I’ll comb through what’s left and hopefully find some really great deals.  The nursery is about thirty minutes out of town, but it’s a beautiful drive out through the country.

Back to yesterday.  Amanda and I agreed that we would leave early and try to get there just as they opened at nine.  We arrived at 8:55 and they were not yet open.  We were the first ones through the gate and actually shopped for about ten minutes before any other plant nuts made the scene.  The staff was still drinking coffee and getting ready for the inevitable Saturday crowd.

As we walked down the first row of plants, Amanda found a must-have plant:  Franklinia alatamaha.  Franklinia is a small flowering tree with nice fall color.  The tree was discovered by John and William Bartram in the late 1700’s and is now extinct in the wild.  All the trees in existence today come from seed gathered by the Bartrams.  I find this pretty amazing.  This is Amanda’s second attempt with Franklina.  Her first Franklinia went extinct in her garden from neglect (for shame).  Let’s hope she has better success with this one!

I found what I was looking for – my vegetable starts, including spinach, kale and several lettuce varieties.  I also picked up half a dozen Lavender ‘Munstead’ to add to the vegetable garden for color and fragrance.  Amanda came across a Methley Plum she had been interested in and after hearing her description I got one too.  I have a “driveway orchard” with fruit trees in pots, and the Methley Plum will be my fifth fruit tree.

We both picked up a few other odds and ends.  Amanda got very excited when she saw the Elephant Ears, Colocasia, and added ‘Thailand Giant’ to our cart.  We shared a (large) cart and promised each other we’d quit when the cart was full. (photo from groworganic.com)

We wrapped up our first Painters trip in under and hour and a half.  Just as we were loading the truck another of my plant nut friends, Elizabeth, called to see what treasures we had found.  She couldn’t come with us but was excited to hear about what we had seen.  I gave her our report and we jammed all the plants, including the three trees, into the cab of my truck (I had forgotten the plant tarp) and headed back up the mountain. 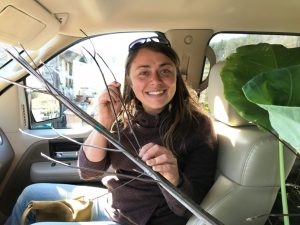 I was home by 11:00 am with plenty of time to get some gardening done.  One of the most satisfying clean up jobs in my garden is the veg garden.  It is a discrete space, and pretty easy to move through raking up leaves and pulling out old crops.  I got the cleanup done and the greens and lavender planted in due course. 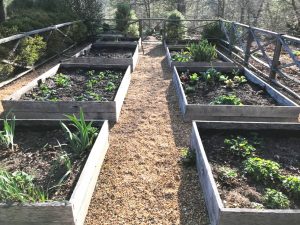 About the time I was finishing I got a text from Amanda reporting that she’d gotten everything in the ground, except of course the Colocasia ‘Thailand Giant’ which is tropical. 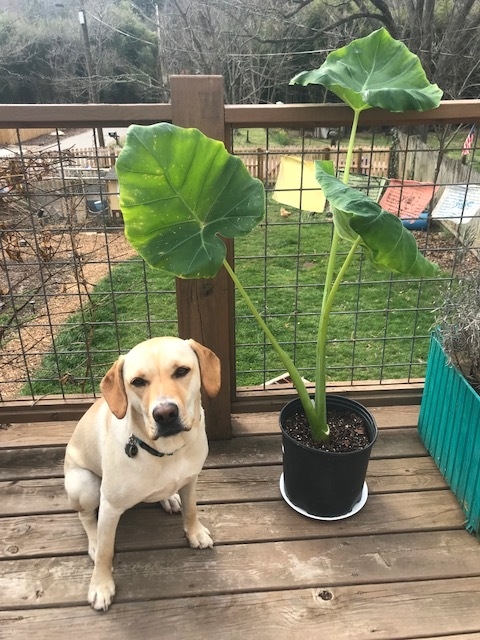 All in all, it was a very fun and satisfying gardening day and a great
first-of-the-season trip to Painters.
Life is better with kindred garden friends!

One Reply to “Kindred Garden Friends”

We use cookies to ensure that we give you the best experience on our website. If you continue to use this site we will assume that you are happy with it.I agree.Privacy policy