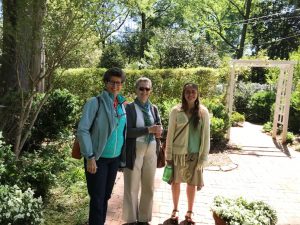 A couple of weeks ago, a group of gardeners and I made a two and a half hour dash to Charlotte to take in Elizabeth Lawrence’s Garden, Wing Haven, and Stowe Botanic Garden.  Certainly an ambitious itinerary, and with a detour to Campbell’s Nursery, inevitably incomplete. 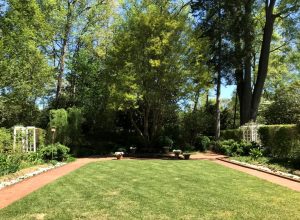 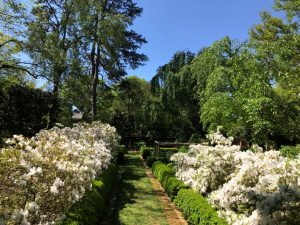 It’s amazing to walk down a shady Charlotte street and into two amazing gardens.  We started at Wing Haven, a three acre garden designed by Edwin and Elizabeth Clarkson in the mid-twentieth century.  Elizabeth Clarkson was an avid birder and the garden was designed not only for pleasure, but for bird food sources and habitats.  The garden offers long axial views, quiet pools in the shade of mature trees and plenty of interesting plants.  We were lucky to see the Azaleas at their peak. 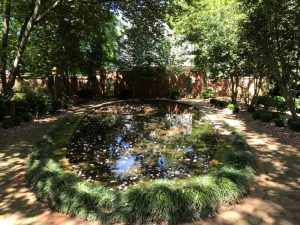 Not only does the pool reflect, the brick wall at the back has mirrors set into it. 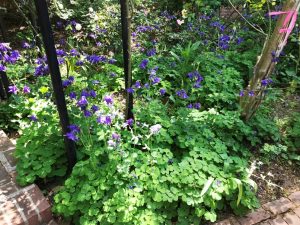 The Wing Haven rose garden was peppered with this Aquilegia.  No label, but I sure would like to have this for my part-shade meadow.  It is clearly a good re-seeder.  Possibly Aquilegia yabeana? 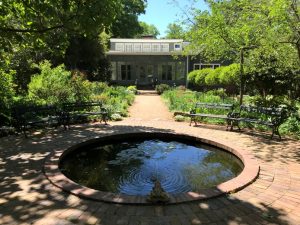 A block or so down the street, we walked “through the garden gate” at Elizabeth Lawrence’s house, and a little shiver ran down my spine.  I have read many of her books and as I walked through her garden her words echoed in my mind.  She wrote many of her Charlotte Observer columns about her own garden; taking an early morning tour, coming in from weeding, looking out her window at the thin coating of ice on the garden pool.  Her writing is accessible, informative, and sometimes entertaining.  I highly recommend Through the Garden Gate, edited by Bill Neal for a great sampling of her work.

Though she was a trained Landscape Architect, Elizabeth Lawrence’s personal garden was designed for the plant addict.  She crammed so many interesting plants into this small backyard and wonderfully, it is almost all labeled.  About 60% of the plant material is original to her and, according to the literature about her garden, there is something in bloom every day of the year.  I was given a small piece of Kenilworth Ivy, Cymbalaria muralis, by a gardening friend who knew Elizabeth Lawrence and told me that his original plant came from her garden.  Sadly it has slipped away as has he, but the memory of both gardener and plant is nice. 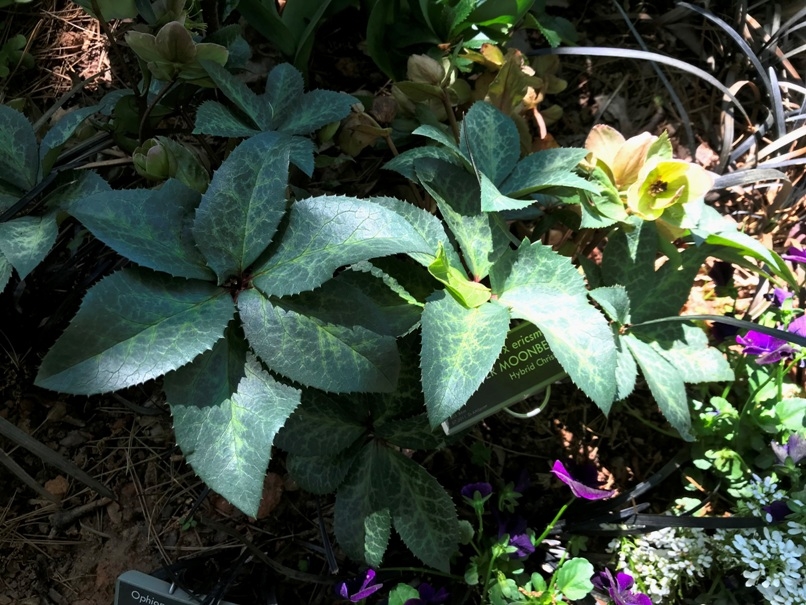 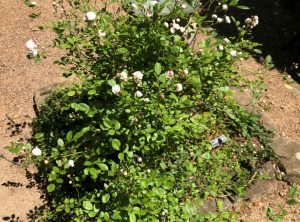 Amanda and I were struck by a fragrant rose called Picayune, found in New Orleans.  It has very small flowers of palest pink and nice clean foliage.  I found it offered online and we are both going to have it in our gardens.

One plant that was not labeled was a mystery to us.  Amanda, Elizabeth and I thought it was a phlox, but Sieglinde solved the mystery:  It is Linaria rediviva.   Sieglinde has just dug one from her garden for my part-shade meadow and I’m hoping it will seed. 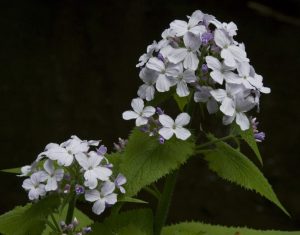 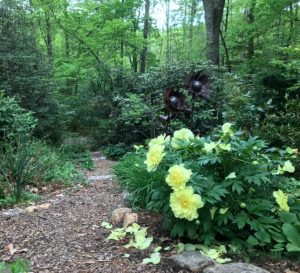 The plan was to visit Stowe Botanic Garden after lunch, but we made a side trip to a wonderful old Charlotte nursery called Campbell’s.  The nursery manager was really into his plants and eager to talk with each of us about something special.  Amanda got a nice little pot of a miniature Hosta ‘Tears of Joy’ which she promised to share with us.  Elizabeth vacillated about a mammoth Paeonia Itoh ‘Yumi’ that was quite expensive.  We told her to get her kids to kick in on the plant for Mother’s Day, and that did the trick.  Sieglinde picked up several nice plants including Hosta ‘Empress Wu’, which is brave considering her vole problem.   Unbelievably, I came home empty-handed.

By the time we packed the car and got to Stowe, we had less than an hour before closing.  We decided to make a return trip and include the UNC Charlotte Botanical Gardens.  There is another great nursery up by UNCC, Dearness Gardens, which we won’t want to miss … but we’ll have to save that for last! 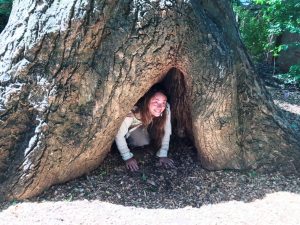 Always fun to travel with Amanda, seen here inside an amazing Tulip Poplar at Wing Haven.