A Snake, A Friend, and A Plant

A snake, a friend, and a plant go into a bar … Just kidding!  These three words connect to make quite a nice garden story.

We live in a mountain cove in Asheville, NC.  The cove has a central four-mile road running through it with lots of little side roads that wind up the mountains on either side.  It’s a lovely setting, but it makes it hard to get to know your neighbors because everyone is tucked away.  Enter THE SNAKE.

Driving into the cove one afternoon, I came upon a woman driving out of the cove who from the open window of her car was trying to encourage a lovely long black snake to move off the road and avoid getting squished.  I stopped my truck, hopped out and stomped around the snake until he decided the nice warm road was not worth the bother of these two raving women and moved off into the wood.

Naturally, we had a good laugh and introduced ourselves.   After a bit of where do you live, oh, I live just up the road, and was it you who was building something up there this summer and what was that, it’s a new root cellar and potting shed, I’m really into gardening … we became instant FRIENDS.

Turns out, Elizabeth has lived in this cove for thirty years and has made the most remarkable garden.  Even though we are just a mile down the road from one another, she’s on a moist east-facing slope and I am on a sunny, south-facing knoll.  Elizabeth’s woodland garden is filled with spectacular stands of native Rosebay Rhododendron, deciduous azaleas, and masses of native ground covers such as monkshood, cohosh, trillium and trout lily.

To this she’s added a wonderful collection of ornamental shrubs and trees, one of which is a delicious Daphne odora.  This PLANT has been in her garden for many years.  It is planted along her drive near the front door so she can enjoy the exquisite fragrance this time of year.  Outstanding plants woman that she is, Elizabeth propagated cuttings of this Daphne and I am the lucky recipient of one those rooted treasures. 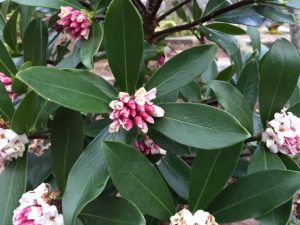 Though Daphne odora is listed as Zone 7, this specific plant has been quite happy in a protected spot in Elizabeth’s garden.  It may be a particularly hardy cultivar, but that information is lost (if it was ever known).  My cutting is looking healthy in its second year, blooming like mad and perfuming the whole pond garden.  I can’t say that I’ve treated it particularly well, but it does have good drainage and that’s a must for Daphne.

I am so pleased to have both Daphne in the garden and Elizabeth as a friend.  It pays to help others, even a snake.

Subscribe to get notified about new features and promotions.

Nancy Duffy is owner of Muddy Boots Garden Design and has been designing (mostly) residential gardens in Asheville, NC since 2001. She is an avid gardener and certified plant nerd. She lives and gardens on four acres with her husband Dennis and Gidget, their German Shepherd Dog.

Dennis Duffy is a marketing consultant and blogger. In his off time, he is an avid runner and cross trains by moving mountains of mulch and compost.

The illustrations on this website were done by Nancy Duffy. She also does custom drawings from photographs. Click here to learn more about her Garden Portraits.