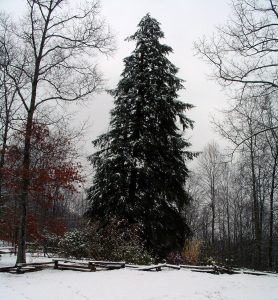 In the 20 years and we have lived at Acorn Hill I have planted a lot of trees.  But the tree that was here when we arrived, the most special tree on our property, is our 100’ Hemlock.  According to a knowledgeable arborist, this tree is at least 100 years old.  There are about a dozen unmarked headstones under this tree estimated to date to the turn of the last century.  It stands sentry at the very top of our property.  It is the tallest tree around here.  It is treasured.  And it is dying. 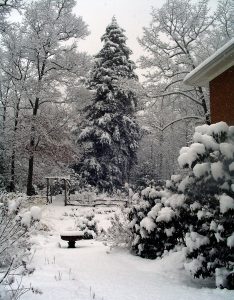 No, it’s not woolly adelgid.  We have treated this tree every four to five years for this pest and the canopy looks very healthy.  My friend Amanda was the first to recognize the significance of my finding a Reishi mushroom at the base of the trunk.  This mushroom, Ganoderma tsugae, grows on dead and dying Hemlock trees.  The fruiting body is the outward sign of the presence of the fungus.  The fungus is not killing the tree; it is present because of internal decay. 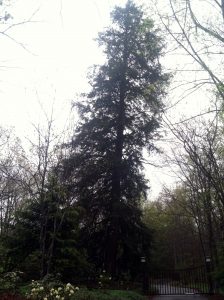 As Amanda and I hugged and patted the tree, we could hear a hollow sound in places.  And there went the alarm bells.  If it came down, the tree would not fall onto a structure, with the exception of our gate, but our concern is for any human, four-legger, or automobile passing by.  Granted we are very secluded and really don’t have passers-by.  But we pass by! 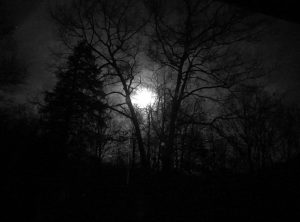 I got four expert opinions and the consensus was … the tree is dying.  No one could say how long it had left, although a couple of arborists were interested in completing some very expensive core-drilling tests.  By the sophisticated method of sounding the tree (hitting it with a rubber mallet), we discovered that there is a column of decay that starts at one of the big buttress roots and ascends the tree.  In this area the tree has gradually shed branches up the trunk.  I have surmised and the arborists agree with me, that the tree was probably damaged when the driveway was installed back in 1994.  It clearly took umbrage with this assault and has been slowly giving up the ghost. 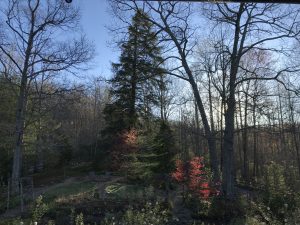 Our options were to wait and see or take it down.  We had to weigh the risk of it falling with the likelihood of it being viable for a while longer.  As I mentioned, the canopy is really healthy where the wood is alive in a horseshoe around the trunk.  It just seemed too drastic to take it down. 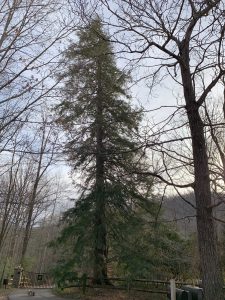 So, we followed the recommendation of one of the arborists and TOPPED THE TREE!  I am SO against this practice and the arborist would not even agree to call it that because the thought is so abhorrent.  We agreed to call it “risk mitigation pruning” … ugh.  The idea is that by reducing the height of the tree by about 20%, we reduce the lever effect pulling the tree down in high wind.  And it gets really windy up here.  Now the tree is about as tall as the oaks and poplars in the forest around it, which will give it buffer from the wind. 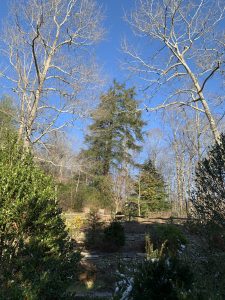 The tree is still on its way out, but we may get another few years with it.  We will watch it closely for signs of advancing decay like bark shedding and foliage die back.  And we will treasure for as long as it stands.  I am going to start collecting seedlings from this tree so I’m ready with saplings when it goes. 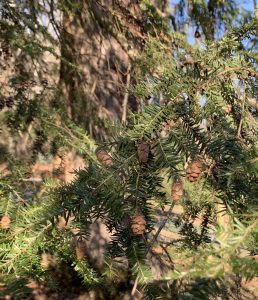 4 Replies to “To Every Thing There is a Season”